Moringa oleifera is a tree brought from the mind of God to the hands of man. It was recognized by the National Institutes of Health as the Botanical of the Year for 2007, and praised again in 2011 and 2012. It is valued worldwide for its ability to treat over 300 diseases. [i] It has the ability to retain high concentrations of electrolyte minerals, allowing it to stay internally hydrated in the driest of conditions. Africans have honored it with names that translate to: “Never Die,” and “The Only Thing that Grows in the Dry Season,” and “Mother’s Milk.” I think it’s safe to say that this plant has saved more lives in 3rd world countries than any other. Why do I say this? This amazing tree is capable of delivering what the body needs and these enzymatically active amino acid sequences may simply not exist in the food chain anywhere else, and that is just the tip of the nutritional iceberg when it comes to Moringa oleifera. [ii] [iii] [iv]

It’s an unfortunate fact that our own “civilized” food supply no longer feeds us well nutritionally. Our food is comforting, and tastes good, but as far as our cells are concerned, too much of what we eat is over-processed, denatured and acidic, and ends up depleting our bodies— robbing us rather than feeding us. Today’s western diet has double the caloric intake of a consumer in 1965 and we are receiving 75% less nutrient value for current calories consumed. Seeking daily, quality nutrient supplementation is no longer an option but a requirement for health. We all need to supplement our diets in the most efficient and economical means possible.

When we consider the incidence of disease affecting the 317,000,000 people in America (215 million overweight or obese, 50 million with heart disease, 45 million with chronic headaches, 44 million with osteoporosis, 37 million with arthritis, 30 million with sinus problems, 26 million with diabetes, 79 million pre-diabetes, 12 million with cancer, 6 million with Alzheimer’s) and we understand the relationship between nutrition and disease, it seems obvious but we have to ask how did this come to pass. Hippocrates will be proven right: food is indeed our medicine and the answer to disease.

Moringa oleifera provides a rare combination of zeatin (a potent antioxidant), quercetin (a flavonoid known for its ability to neutralize free radicals and relieve inflammation), beta-sitosterol (a nutrient superstar that blocks cholesterol formation or build-up and is an anti-inflammatory agent for the body), caffeoylquinic acid (another powerful anti-inflammatory compound), and kaempferol (a key nutrient that promotes healthy body cellular function). All in all, enzymatically active and bioavailable Moringa oleifera provides 36 natural anti-inflammatory agents. Free radical damage caused by electron-seeking, highly reactive, oxidative molecules has been identified as the source of many maladies through mechanisms such as inhibition of telomerase, changes to cellular permeability and DNA damage. It has been established that Moringa oleifera contains 46 different antioxidants. [v] [vi] [vii] [viii]

According to Memorial Sloan-Kettering Cancer Center’s website, “In vitro and animal studies indicate that the leaf, seed, and root extracts of Moringa Oleifera have anticancer, hepatoprotective, hypoglycemic, anti-inflammatory, antibacterial, antifungal, antiviral, and antisickling effects. They may also protect against Alzheimer’s disease, stomach ulcers, help lower cholesterol levels, and promote wound healing.” [ix] All I can say is “WOW!” When mainstream cancer clinics start to tout the benefits of a natural botanical, then we know that there must be something to it! But that’s just the tip of the iceberg with Moringa oleifera!

This “miracle tree” is able to provide all of the amino acids required by the human body. Protein is needed not only for the structural components such as muscle and tissues, but neurotransmitters, hormones, enzymes and immunoglobulins as well. There are various nutrients that can have a beneficial effect on enhancing immune system function and Moringa oleifera certainly qualifies in this category due to the ability to provide several of these phytonutrients. [x] [xi]

Speaking of the immune system, one of the functions of the immune system is to keep pathogens from growing, proliferating and damaging tissues. Moringa oleifera has shown to be anti-bacterial, anti-fungal, anti-viral and antibiotic, which will certainly lighten the load on thbeet detoxifying agent. [xv]
n e immune system. [xii] [xiii] [xiv] In addition, Moringa oleifera demonstrates the ability to be a poten
Amazingly, the leaves of this extraordinary tree contain 7 times the vitamin C found in oranges, 4 times the calcium in milk, 4 times the vitamin A in carrots, 2 times the protein of yogurt, 25 times the iron in spinach, and 3 times the potassium in bananas. 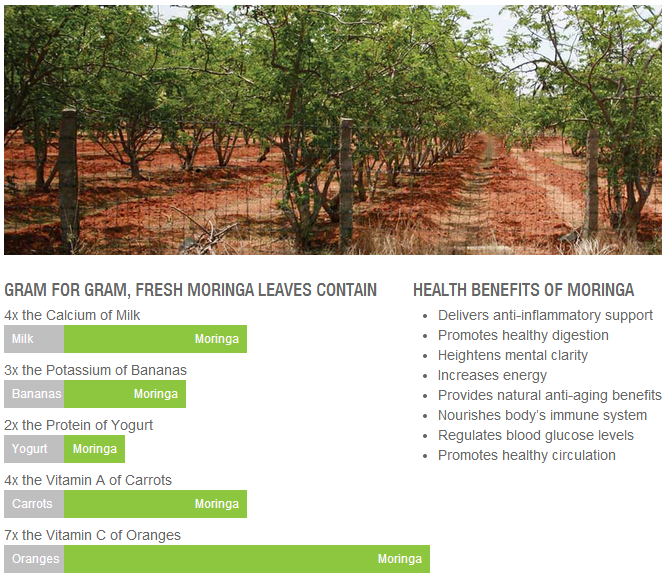 The real mystery is how this four thousand year-old panacea plant went missing and disappeared from the nutritional horizon. Fortunately it has reappeared. As a matter of fact, the Bethesda, Maryland-based International Eye Foundation is now using Moringa, with its high content of beta-carotene, converting to Vitamin A in the body, to combat childhood blindness. Doctors are using Moringa oleifera to treat diabetes in West Africa and high blood pressure in India.